What if you found a wrinkle cream which contained not one, or even two or three, but twelve different and scientifically proven anti-aging peptides in its anti-wrinkle formula? Well, the manufacturers of Nanotokin are asking their customers that exact question. They claim that their wrinkle cream contains these peptides, and in higher concentrations than any other anti-aging product on the market.

A single 1 oz. jar of Nanotokin retails for $149.95, but it is on sale right now in the Amazon marketplace for $98.95. Although many other wrinkle cream review sites claim that this cream has a manufacturer's website where you can also buy the product, our investigative review experts were unable to find it. 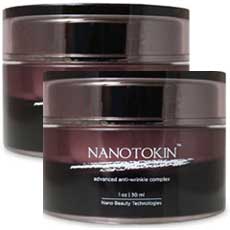 As stated above, Nanotokin boasts 12 scientifically proven anti-wrinkle peptides in its formula. Of those, it contains Argireline NP, a peptide which wrinkle cream experts claim is a cheap and safe alternative to getting botox injections. There's also Matrixyl 3000, which plumps skin by increasing your collagen and moisture levels. Similar peptides, such as Syn-Coll, SNAP 8, and Elhibin are also included in the formula. Unfortunately, we were unable to find a full list of all 12 peptides, which makes it hard to determine whether their claims of effectiveness are genuine or not.

Customer reviews warn other buyers to use this cream sparingly. They claim you will still get great results but that your supply will last longer and you won't have to spend the nearly $100 it costs per jar as frequently. You can spread it all over the face and neck, making sure to massage it into the skin until the cream is completely absorbed. You may use it at night, or nightly and daily with your morning routine. If you develop a rash or any other form of skin irritation, stop using Nanotokin and contact your doctor. This is especially important if you have sensitive skin, because the high concentration of peptides in the Nanotokin formula could potentially irritate your skin.

The Final Word on Nanotokin Cream

Nanotokin boasts a formula with twelve scientifically proven peptides in a 35% concentration. They claim that this enhanced concentration of peptides, and the wide array of different peptides which they have included in their formula, will make your skin feel "softer, smoother, and healthier" after your very first use. And, unlike most wrinkle creams out there, their Amazon listing actually has a good amount of positive reviews which seem as though they were written by real people (and not people paid to post positive reviews, which is unfortunately common these days).

Another important note to mention is that many of the Nanotokin reviews claim that this cream used to only cost about $40-$50, which is half of its current sale price. One review even commented "well, I guess they jacked up the price once they realized they were having success with it". That dramatic price increase, the lack of an actual home page for the product, and the fact that the high concentration of peptides could cause adverse reactions for people with sensitive skin puts this product on our "try with caution" list.