The Dead Sea Anti-Wrinkle Cream by Premier Cosmetics builds on the idea that, just like certain seaweed found in the Dead Sea, our skin needs strong defense against time and the elements around us.

The Dead Sea, located near Jordan, the West Bank, and Israel, is among the saltiest lakes in the world. This environment is so harsh that marine life cannot survive here, hence the name "Dead Sea".

It was found, though, that the same mechanism which allows rare unicellular green seaweed to survive in the Dead Sea is present in the human skin. So what if the human skin could be further strengthened by the defensive characteristics of Dead Sea vegetation? That's the idea behind "Dead Sea" products. But does this idea have any validity? We'll check the facts to find out. 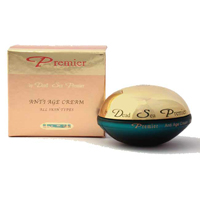 This anti-wrinkle cream claims to:

This cream consists of:

Packed in every ounce of Premier Cosmetic's Dead Sea Anti Age Cream is a powerful combination of both rare and common ingredients promising to make the skin glow with youth. But is there a catch?

Customer reviews on the Dead Sea Anti Wrinkle Cream by Premier are too few in number to give a conclusive. One user posted that her skin was too oily to benefit from the product and thus discontinued using it.
It should also be noted that this particular anti-wrinkle cream does not come with sunscreen, which is essential for aging or damaged skin.

Premier's Dead Sea Anti Wrinkle Cream can be purchased from retail stores at a somewhat reasonable price compared to many other products, although more discounts may be found online. Buyers are given a warning though: The Dead Sea skin solution trend is growing so quickly that it is now even harder to distinguish the real deal from those which falsely carry the name simply as a marketing stunt. Premier advises online shoppers to always look for the original seal to make sure that they are dealing with an authorized dealer.

Ultimately, Premier's Dead Sea Anti Age Cream promises to replenish what the skin loses over time, which it may do, but it doesn't have any ingredients or any reviews out there to really justify its use or its name as an anti-wrinkle cream. That being said, this product may work for some people as a moisturizer, but will probably not serve much purpose as an anti-wrinkle product.

Curious to find out which products turned out better in our research? Check out our comparison chart to find out!